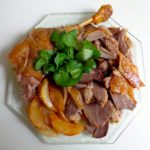 Roast goose was a traditional Christmas dish in France for many years, probably for centuries, but it is rather rare on holiday tables these days, having ceded its place to turkey, capon or duck. Nonetheless, roast goose is delicious. This year I decided to roast a goose well before Christmas in order to post it here in time for you to think about it, and perhaps make it. But getting the goose proved harder than anticipated. In fact it was a bit of a feat.

It all began in early December when I invited a few friends over for dinner the following Saturday, promising them roast goose. I set out to the local farmer’s market on a Sunday morning, six days ahead of time, hoping if not to find a goose at least to order one. My favorite poultry merchant, Monsieur Breton, had no geese on display. When I asked if he could get me one when the market reconvened on Thursday, he gave me a Gallic shrug.

The problem was not just that geese are raised in France to be ready for the market only in the week ahead of Christmas. There was also the matter of the gilets jaunes, the protesters demanding a living wage who have blocked roads and, joined by hooligans on Saturdays, wreaked havoc in France for the last few weeks. Monsieur Breton said that even if he could find a goose that was ready for the market, he couldn’t be sure he could get it. For the protesters have not only blocked roads, they have blockaded fuel depots, and gasoline supplies are uncertain throughout the country. Trucks aren’t delivering the goods.

‘Call me Wednesday,’ said Monsieur Breton, handing me his card. On Wednesday I called. ‘Call me Thursday,’ he said. I tried, but he didn’t answer. By this time I had called off the dinner party. In any event, a couple of guests had begged off, saying they were afraid to cross Paris on a Saturday night, what with angry people setting cars on fire and smashing windows throughout the city, and the police riposting with tear gas. But I still wanted to make the recipe for the site. So I texted him on Friday morning. Again, no reply.

Early Friday evening, I was minding my own business at home when my phone signaled that I had received a text. It was Monsieur Breton. ‘You can count on a goose on Sunday morning,’ he wrote. Well! I quickly rescheduled the dinner for the following Tuesday. Four people could make it, and a fifth wasn’t sure.

On Sunday morning, I took my time about getting to the market. It was raining hard, but eventually off I went. Arriving at Monsieur Breton’s stand, I peered at the poultry display. There I saw … half a goose. As Monsieur Breton was nowhere to be seen, I hailed his wife. ‘Excuse me,’ said I in dismay, ‘but where is the other half?’ Again, the Gallic shrug. ‘We sold it,’ she said. ‘But I ordered a whole goose,’ I protested. ‘Would you possibly have another?’ She looked around for her husband. He might have one, she said.

As she picked her phone to call him, I noticed the price of the partial goose, written in blue grease pencil on the pink wax paper beneath it. 54 euros! ‘Hold on a second,’ I said. ‘Is this the price of half a goose?’ She gave me a cool nod. Mais oui, madame. I made a quick calculation. ‘Does that mean a whole goose costs more than a hundred euros?’ (108 euros = $122). Mais oui. ‘Never mind,’ I said. ‘Half a goose will be fine.’

At that point, Monsieur Breton arrived on the scene. Along with the half a goose, he gave me half a liver, half a gizzard and half a neck. He also proposed half a heart, but I passed. The 9-pound bird would feed four or five, he said, and should roast for 2-1/4 hours.

I had my doubts about the cooking time, but had no doubt that I wanted my guests to have enough to eat. Not wishing to add another bird, I decided to make several side dishes — pear slices sautéed in butter, sautéed baby artichokes, stuffing and watercress salad  — with braised fennel soup to start, and cheese and clémentines to finish. One of the guests brought a poppyseed Christmas cake she’d acquired in Berlin. No one went hungry.

I roasted the goose on the Tuesday morning — I couldn’t wait until dinnertime because my recipe photos need natural light. Early preparation turned out to be a great idea. I was able to carve the goose at my leisure and reheat it just before serving. In the end, the roasting time was 1-1/2 hours, perhaps because it was only half a goose.

If you’ve never roasted a goose before, there are tips on the recipe page for ensuring that it stays tender and moist. In the next few days, I will update the Holiday Menus page with this recipe and others you may wish to consult for creating a festive occasion.

08 Feb, 2022 The work-from-home movement may soon take the leap from temporary necessity to selling point. Facebook’s $3bn acquisition of Oculus in 2014 spawned a virtual office space for employees working from home . The Facebook / Meta VR flagship, Quest 2, released the Horizon Workrooms programme, a space for teams to remotely connect and collaborate. Virtual reality (VR) and the broader XR (extended reality), have been in development for some time. The first iteration of virtual-world building looked wildly different to modern renditions. In 1962, film-maker Morton Heilig created the Sensorama: a theatre experience with moving 3D images, peripheral visuals, binaural sounds and even air currents. Six years later, the first head-mounted display system was created by Ivan Sutherland — but it was so heavy it needed to be suspended from the ceiling. Whether you’re into slicing to the Beat Saber or diffusing explosives in Keep Talking And Nobody Explodes , gamers have dominat

Sex permeates French society, including the language. All nouns have genders—either masculine or feminine—though it’s sometimes unclear why a word is one or the other. Chemise  (shirt) is feminine, for example, while chemisier  (blouse) is masculine. Go figure. And just when you think you’ve figured out the gender rules, somebody goes and changes them. That somebody is the Académie française , the arbiter of all things having to do with the French language. And the new rules they just announced are such a big change that some consider them “true barbarism.” Only in France! Read all about it at Frenchly ! tiktok unlimited coins tiktok mod apk unlimited coins tiktok coins free